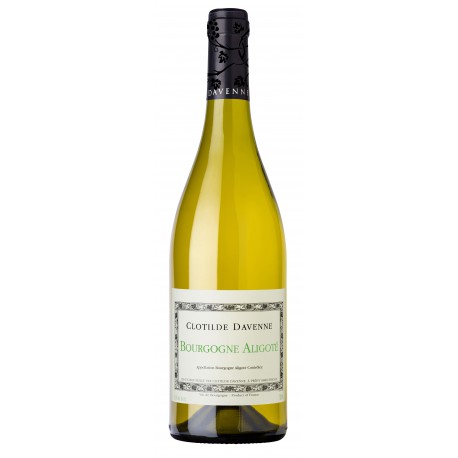 A limpid golden wine with a lively nose of acacia, hawthorn, apple and peach. There is a mineral freshness which is typical of the terroir which is accompanied by a fruity body of peach and white flowers. The wine is rounded and elegant with a refreshing finish.

The Aligoté varietal first emerged in the Bourgogne winegrowing region in the 17th century, and is the result of a cross between Gouais Blanc and Pinot Noir. It also shares its origins with Chardonnay.

For the past five years, its reputation has continued to grow. Bourgogne Aligoté is now appreciated by wine lovers for its vivacity and thirst-quenching qualities, and is popular among a hip young clientele.

Bourgogne Aligoté first catches the eye with its pale yellow color with hints of gold.

On the nose, it offers a range of delicious aromas of white-fleshed fruit, white blossom, peach, lemon, linden, acacia, hazelnut, green apple, and sometimes even citrus.
On the tongue, it is always remarkably fresh, with hints of saline and a fruity acidity that ensures good length.

Ideal as an al fresco aperitif in the garden, with lunch on the riverbank, to accompany a barbecue, or for a dinner with friends by the fireside, Bourgogne Aligoté is the perfect accompaniment for a convivial event and is ideal for sharing.